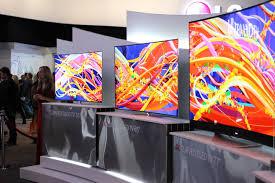 The audio-visual industry is changing rapidly. 2019 has seen some enormous leaps forward in how we view our content. In 2019, industry leaders launched a whole bunch of exciting inventions that look set to replace some of the current technologies. And seeing as 2019 has now drawn to a close, we thought now would we a good time to review what has been going on in the world of AV over the past 12 months.

4K resolution means that your horizontal display resolution is 4000 pixels. Mainly used in digital TV and digital cinematography, 4k provides four times the resolution of 1080p, which is what most home TVs currently use. It’s expected that by 2020, over half of all homes in the USA will have 4K capable TVs, and the UK isn’t far behind. Even now, consumer demand for 4K hardware and content is escalating rapidly.

4K video is perfect for large video displays where there are big audiences. It’s also perfect for detailed content situations such as virtual reality or fine photography. It can be used in surgical theatres during delicate operations or in the military where very high-resolution images are critical. Hardware manufacturers of televisions, cameras, laptops and more are trying hard to make 4K available to a broad spectrum of users- both professionals and consumers.

Projection mapping is a projection technology that can turn unevenly shaped objects like buildings or theatre stages into display surfaces. Videos are projected onto the surface, and specialised software spatially maps 2 or 3D objects of real surfaces. The software then communicates with the projector and fits any required image onto that surface.

P-mapping has many applications. Advertisers can add extra dimensions and optical illusions such as movement to stationary objects. Usually, the video part is mixed with audio effects to compose some kind of audio-visual story. Projection mapping is becoming more common in films and television where directors use the technology to create an immersive environment.

Another application is in the electronic dance music scene, where DJs can sync visuals with the music. Some visual artists are already using it to enhance their other creative mediums, such as painting. In cities like New York and London, artists have projected images to show their work, opening up a whole new form of expression as almost anything can be used as a canvas.

This has probably been the hottest topic in audio-visual circles in 2019, and tech giants are enthusiastically educating us about the potential of this tech.  There are differences between the two: virtual reality is “active” while augmented reality is “passive”. When they’re combined, it’s known as “merged reality”. Both are already popular with gamers, but they’re set to be used for many other applications, too. Manufacturers, for example, are looking at how to combine augmented and virtual reality technology with projection mapping.

Currently, virtual reality tech uses special headsets with a screen in front of the eyes. The headsets generate highly realistic pictures and sounds to simulate a user’s presence in a virtual environment. The user can “look around” the environment and interact with it. The same effect is also being achieved in rooms that have been specially equipped with large screens.

While this audio-visual trend isn’t new, 2019 saw it being used more and more. Live video streaming involves taking a real-time broadcast and streaming it to an internet audience. Video content already accounted for three-quarters of all internet traffic back in 2017, and it's predicted to rise to over eighty per cent by 2020. It’s become more popular due to the proliferation of smartphones and tech improvements. Plus, consumers trust it more because it’s real time and therefore un-editable, which is why today's audiences perceive live stream as more authentic.

Viewers also like it because they feel connected and can give instant feedback, so essentially, it's a two-way conversation. Live video ads have proven to be a highly effective form of marketing and receive the best ROI of all social media platforms. Hardly surprising then that more and more business owners are using this trend to grow their businesses and create brand trust and awareness.

Almost all types of technology incorporate some form of AI and machine learning. This technology has huge potential to deal with burdensome and boring tasks that can be easily automated. Think Amazon’s Alexa and Apple’s Siri. Meanwhile, growing concerns that these devices are continuously “listening in” and violating our privacy seem to be unfounded. While it is true that they are “always listening” they are not “always transmitting”. Also, smart speakers come equipped with a “mic mute” button for use during private conversations.

The use of voice control solutions is becoming commonplace in the home automation sector, but it’s now being used in corporate situations, such as meetings and conferences, too.

Many people still find AI scary. But that has stopped the tech from becoming more user-friendly and mainstream. For instance, San Jose International Airport uses wayfinding robots that speak and understand many different languages. They help travellers find their way, entertain them, and perform other useful tasks.

The automation of both our homes and offices is definitely on the increase. AI assistants like Alexa, Cortana and Siri give people back a little of their time and provide a more natural way to interact in a digital world. And while they could never completely replace touch-based interfaces, there’s certainly a broad acceptance for more of it.

Capacitive touch screens are different to the usual resistive touchscreens we’ve all become used to. Instead of using the pressure of a finger to change the electrical flow, they work with anything that has an electrical charge. This includes our skin so when a finger touches the screen, a small electrical charge is transferred to it, completing the circuit. Experts are working to perfect the technology for larger screens, but the process is proving to be quite challenging.

Capacitive touch could potentially increase customer engagement at shows and exhibitions. It’s already possible to create ad campaigns on walls with permanent graphics overlaid with sensors and short-throw projection. This gives the audience something memorable, adds an element of surprise, and generates new content when spectators touch the wall in different places.